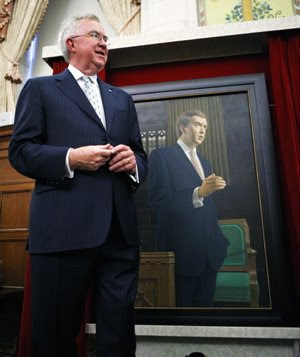 In an act of vanity on par with Barbara Walters’ lighting and Americans choosing the “thin Elvis” postage stamp, Joe Clark unveiled a portrait of himself – circa 1975 – on Parliament Hill Tuesday.

If only the Sex and the City movie (opening this Friday, in case you hadn’t heard) could have been rendered entirely in CGI by Patrick Douglass Cox, who has given us Joe: Portrait of a Young Fogey, now adorning the halls of Parliament like a still from Austin Powers: The Spy Who Retouched Me: imagine the Botox and light filters that might have been saved.

On the other hand, perhaps we should be grateful that Clark resisted the urge to ask that Cox depict him dressed as Evel Knievel jumping a Harley-Davidson over Pierre Trudeau’s cabinet, while Ann-Margret waits just beyond the landing ramp with arms outstretched.

In his remarks, Clark urged greater respect in public life:

“We are a country of immense diversity. We are going to have our clashes. We have to try to understand the origins, the point of views of others. We have to show them a sense of respect that’s based on the sense of worth that they bring,” he said, drawing applause from the audience.

But you didn’t have to go as far as Alberta to find people whose opinions Clark had little time for. As Clark would be well aware, many members of his own caucus on his first go-round as leader found themselves sidelined and ignored. Luckily Brian Mulroney was always happy to take their calls and sympathize with their frustrations. Or maybe Clark remains blissfully oblivious to this still: given his conduct in recent years, that seems quite possible.

Clark’s paean to r-e-s-p-e-c-t came less than 24 hours after he took the opportunity of an appearance on "Mike Duffy Live" to take another kick at Stephen Harper’s goolies (coincidentally, another Albertan), a kick that was better aimed than most of Joe’s tactics or strategies as leader:

“I’ve not had a prime minister before whom I didn’t think I knew where he really was, what his real concerns were. I didn’t always agree with him, but that’s the situation I’m in ...,” the former prime minister said yesterday in an interview with CTV Newsnet’s Mike Duffy.

“Even the Afghanistan mission it seems to me is, in effect, a reflection of the interest of working with the U.S., which is a good thing but not alone,” he said. “And Canada’s reputation internationally, which is an immense asset to the country, depends upon using both sides of the Canadian coin ... I don’t think he [Mr. Harper] is inclined to that and I don’t think his government has given a leadership to an excellent public service to be able to do that.”

Sadly, Duffy did not interject to remind Clark that the Afghanistan mission is NATO-led, and was initiated and extended by two Liberal prime ministers, one of whom – Paul Martin – Clark endorsed as “the devil we know” in the 2004 election. Now why would Clark urge Canadians to re-elect a corrupt Liberal government, instead of a Conservative one led by a man who had succeeded where he had failed?

And, yes, I am going to say it, because I always have to: my vote for Joe in the 1998 PC leadership is the only vote I wish I could take back.

Mike McGuire has also posted on this.
Posted by Joan Tintor at 12:27 a.m.

I also voted for this man on a few occasions. it is very sad that he has been reduced to this. He realy ahs become the Jimmay carter of canada.

Like all the Trudopian era worshippers, Joe is stuck in a time warp, alone, like a political orphan from another time...and this to say:
"Only the village idiot never changes his mind"...

...So, Joe's portrait should of been a scene from a group of peasants in a small town looking up at their "village idiot", ALONE, about to jump off a roof top.

Actually, it's a beautiful portrait and I think the artist deserves credit.

Your reactions are a little overdone I'd say.

You certainly are a hateful bunch.

Is Roy really a doctor?

I have never been to Alberta in my life but I know one thing. Stephen Harper is not an Albertan. Joe Clark is an Albertan.

A Liberal plant. He was too clueless to know that his role was to prevent the PC's from ever getting a majority government. For that, he was a shoo-in for a Liberal patronage appointment.

His side profile countenance reminds me of Alfred Hitchcock minus the talent.

Albertans and conservatatives know that Joe Clark is unrepresentative of the former and hostile to the latter.

Ontario-born Stephen Harper has much more in common with the average Albertan/westerner than Joe Clark ever did. Anonymous was bang-on when he said Joe was "Central Canada's version of an acceptable Albertan". Meaning wimpy and deferential. I like to refer to him as Joke Clark.

Albertans and conservatatives know that Joe Clark is unrepresentative of the former and hostile to the latter.

Every time I hear people speak like this, I want to explode. I am an Albertan, born and bred and proud of it. I have voted NDP in every election I could and I have only once had a representative from my party.

Albertans do not equal Conservatives.

The electoral system tends to translate small electoral pluralities into sweeping legislative majorities giving the appearance of uniform support where there is actually great diversity.

To suggest that one can only be Albertan by subscribing to one particular ideology / party is offensive and totalitarian.

I'm an Albertan, born here and always lived here. John is perfectly right; Joe is an Albertan while Harper is a robot produced in Ontario.

Joe was, of course, most popular with the very people who would never vote for him. He was every Liberal's favourite Tory. Liberals I knew would go on and on about what a "good and decent man" Joe was, and how awful it was that more Tories didn't support him. At this point, I asked them if they were voting for Joe. "Well, no, but..."

Let's contrast that with, err, more electorally successful politicians. In contrast to Joe, Trudeau, Mulroney, and Chretien were absolutely despised by their opponents, yet each won majority governments. Harper also is hated viscerally by Liberals, yet according to Angus Reid 58% of Canadians believe he will be re-elected. (That is a key polling number to watch, BTW - very rarely is that number wrong when it comes to determining the winner of the next election. The public can generally pick winners, even if they don't always like them.)

It has been said that politics is about knowing who your friends are, knowing who your enemies are, and treating them accordingly. It always struck me that Joe never quite figured that out, or at the very least spent a career unsuccessfully trying to prove it wrong.

Thanks for the comments, folks.

FYI, I am offline until 9:30 p.m. approx. and any comments in queue will be approved then.

Simon, I have often felt exactly the same way you do as a conservative in Ontario.